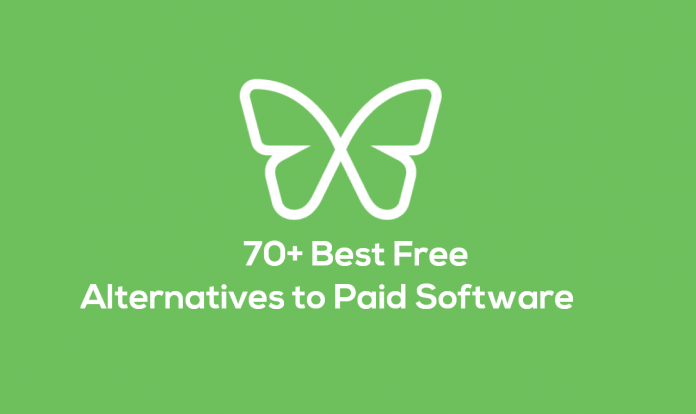 Today I’ll provide you 70+ Best Free Alternatives to Paid Software. Therefore making a small contribution for those of you that will find free alternatives on this list.

Wunderlist – The best task-management app ever, period. (Everywhere)
Pocket – Found an awesome article but don’t have time to read it? Add it to Pocket with one click and read it later. (Everywhere)
OneNote – Microsoft’s free and powerful note manager (Windows/Mac/Android/IOS)
Evernote – A must have at this point, Evernote is your personal-everything manager. (Everywhere)
Trello – Project management software that will supercharge your productivity, (Web, iOS, Android, Win 8)
Pomodoro One – A free time management tool using the famous Pomodoro technique. (Mac)
Howl Timer – A time management tool with customizable time slots.
Sunrise Calendar – Beautifully designed with numerous integrations (including Google Calendar and Evernote). (Mac, iOS, Android)

Slack – Say goodbye to email. Slack is a one-stop solution to all your messaging needs in and out of the workplace.
Adium – Cross platform IM client.
Pidgin – The ‘universal chat client’. Works with everything from Google Talk to IRC.
Telegram – Alternative to WhatsApp. (Android, iOS, Windows Phone)
Skype – Free video and audio calling.
Viber – Just like Skype.
KarmaBox – A tiny utility that sites in your menubar and notifies you when you get new reddit mail. (Mac)

Everything Search – The fastest search for your computer, ever. Find anything in miliseconds.(Windows)
Flux – Protect your eyes by automatically adjusting your screen’s brightness according to the time of day. (Windows, Mac, Linux)
Dashlane – The best password manager ever made – it is an even better alternative than its many paid counterparts. Nothing is stored in the cloud and everything is encrypted – and the best part, it’s all cross-platform. (Windows, Mac, iOS, Android)
Ccleaner – The best tool to clean your computer, manage startup programs, and so much more. An essential. (Windows, Mac, Android)
BetterTouchTool – This will change your life. Open apps, close tabs, dock windows, delete files – all without lifting a finger from the touchpad. If you had to get only one app for the Mac, let it be this one. (Mac)
TreeSize – Scans your computer and visualizes exactly where and which apps are using up your disk space. (Windows)
DaisyDisk – Like TreeSize, except for Mac. (Mac)
Alfred – Search files and web, open apps and so much more. (Mac)
7-Zip – Zipping and unzipping software that is truly free – no nagging trial periods. (Windows)
The Unarchiver – 7-Zip for Mac. (Mac)
Calibre – Complete e-book manager, convertor and reader. (Windows, Mac, Linux)
App Cleaner – Completely uninstall apps and their hidden files with one click. (Mac)
Rocketdock – Get a Mac OSX-like dock for your Windows computer. (Windows)
Rainmeter – Completely customize and transform your desktop with skins, weather forecast, app launchers, quotes, and more. (Windows)
FileZilla – The best FTP client. (Windows, Mac)
Dropbox – The essential file backup solution. (Everywhere)
Memory Clean – Keep your RAM use under control with one click. (Mac)
coconutBattery – Track your Macbook’s battery health. (Mac)
Jing – Capture screencasts or screenshots and share them instantly. (Windows, Mac)
FastStone Capture – Image capture with a full-page (scrolling) screen capture feature.(Windows)