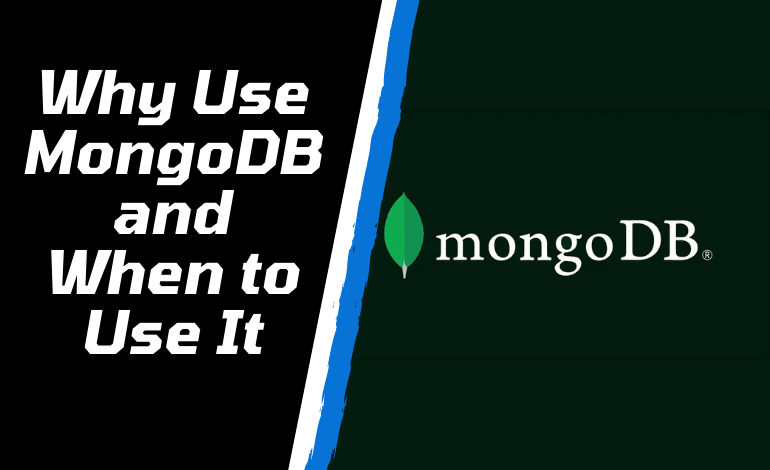 Why Use MongoDB and When to Use It?

MongoDB is a documents database that is used to create high-availability and scalable web applications. Thanks to its modular schema method, it’s trendy among teams of developers who employ agile methodologies. Moreover, with the drivers for all the major software languages, MongoDB permits you to start developing your application without configuring databases instantly.

MongoDB was developed on a scale-out structure which has gained popularity among developers from all walks of life in designing scalable applications that incorporate evolving data schemas.

A document database, MongoDB makes it easy for developers to store structured and unstructured data. It employs a like JSON format to keep documents. The format is directly mapped to native objects in most current programming languages, which makes it a perfect option for developers since they don’t have to worry about how to normalize data. MongoDB can also handle a large volume of data and be scaled horizontally or vertically to accommodate massive data loads.

MongoDB was created for developers who develop business and Internet applications that need to overgrow and expand seamlessly. Teams of developers and businesses of all sizes utilize MongoDB for a variety of reasons.

A document data model for documents Data Model is an effective way for storing and retrieving information within any modern language, which allows developers to work quickly.

MongoDB provides a fantastic customer experience, especially for programmers that can install MongoDB and begin making code right away.

MongoDB has created a vast and well-established platform ecosystem. It is home to a global network of software developers or consultants. It makes it simple to find assistance. The site also offers an enterprise-grade support service.

Utilizing MongoDB lets your team accelerate and go further when creating software applications that deal with various kinds of data in a scalable way.

MongoDB is an excellent option if you want to:

As a company that has grown due to the number of applications that have these characteristics, MongoDB is growing.

MongoDB is an open-source document database based on a horizontal scale-out structure that uses flexible schemas to store information. It was founded in 2007, and MongoDB has gained a broad fan base in the developer community.

Instead of storing data in tables of rows or columns as SQL database, every record in the MongoDB database is a text described in BSON as an image of binary that represents the information. The applications can then access the data in JSON format.

Here’s a primary JSON document that describes a historical person.

Document databases are highly adaptable and allow different variations to document structure and keep documents that are not entirely. In addition, documents can contain other documents included within them. Document fields play the function of columns in an SQL database. And, like columns, they can be indexable to boost search efficiency.

Since its inception, MongoDB was built on an architecture that scales out, which allows a variety of smaller machines to cooperate to construct fast systems that can handle massive amounts of data.

MongoDB has always been focused on offering developers an exceptional user experience. This, along with its other attributes, has resulted in MongoDB being the preferred choice of developers worldwide for a broad array of applications.

How and When Did MongoDB Get Started?

The database’s origins lie from the excruciating frustrations of Dwight Merriman, Eliot Horowitz, and Kevin Ryan. He co-founded MongoDB in New York City in 2007 after struggling to create websites for DoubleClick, which was one of the first pioneers in digital advertising technology. It later became an element of Google.

The company’s creators wanted to create one that the developers could enjoy and would overcome the limitations of Relational Database Management Systems (RDBMS), which use an SQL queries language.

The Mongo component of MongoDB is a word that means massive, pointing to the enormous quantity of data MongoDB can handle.

What are the Advantages of MongoDB?

MongoDB has grown to be among the top desired databases around the globe because it makes it simple for developers to manage, store and retrieve data in applications using the majority of programming languages.

To determine if MongoDB is the right choice for you, we’ll take a look at the benefits that come with MongoDB to developers. It is also possible to look over our top 5 MongoDB attributes.

The Power of Document-Oriented Databases

MongoDB is the first to pioneer what is now described as NoSQL database that was created because the RDBMS systems based on SQL were not able to provide the capacity or speed of development times required for the creation of modern software.

NoSQL is a broad term that covers document-oriented databases such as MongoDB columnar databases, in-memory databases, and much more.

In MongoDB, records are saved as documents within compressible BSON files. Documents can be retrieved immediately in JSON format. This has many advantages:

Most developers can use JSON because it’s an easy and efficient way of describing and storing information.

The most important thing is that the developer is the one who controls the schema of the database. Developers can modify and alter the database schema when the application changes without the assistance of the database administrator. When required, MongoDB can coordinate and manage modifications regarding the layout of the documents through schema validation.

MongoDB developed the Binary JSON format (BSON) to support different types of data than JSON. This format is designed to facilitate quicker parsing of data. In addition, the data that is stored as BSON may be searched, indexed, and stored, significantly improving performance. MongoDB provides a broad range of indexing techniques, including geospatial, decimal, text, and partial.

MongoDB has always put in a lot of time and effort to ensure that users have a wonderful experience. Developers are pleased that MongoDB has taken steps to ensure that it can be used in a variety of programming languages, such as C, C# and .NET, C++, Go, Java, JavaScript, PHP, Python, Ruby, Rust, Scala, and Swift.

As increasing numbers of businesses have joined the MongoDB community, more features have been added to help the operation and use of MongoDB within IT departments of enterprises. In addition, MongoDB provides top-of-the-line support to users who require it.

With MongoDB Atlas, the database-as-a-service at the center of the MongoDB Cloud, it is easier than ever to use MongoDB. You can set up the cluster in a couple of clicks through the web interface and begin writing code nearly immediately.

MongoDB Atlas is also a robust database that has capabilities, such as:

MongoDB’s scaling-out architecture distributes work over several smaller (and less expensive) computers. This allows you to develop an application that can manage spikes in traffic as your business expands.

Innovations in engineering that MongoDB develops enable massive numbers of reads and write. The sharding approach of MongoDB is at the core of these developments that allow large amounts of data to be kept together since the data is distributed across the computer cluster. In contrast, most SQL databases employ an architecture of scale-up that is limited due to its dependence on the creation of faster and more powerful machines.

If you are modeling your data with MongoDB, it is typical to create objects that are a part of one another. The process that used to require multiple updates in relational databases is now accomplished in one transaction using MongoDB.

If needed, MongoDB also supports database transactions that allow for various changes to a database to be combined and then either completed or rejected in a single batch.

MongoDB has been in existence from 2007 onwards and is utilized in a multitude of businesses for various applications. One of the benefits of that popularity is that the platform has been expanded to meet an enormous amount of ever-changing requirements. Large companies are looking to ensure they can easily access assistance with any technology that forms the basis for their operations.

MongoDB has a vast and vibrant community of developers from universities, in the open-source community, and among system integrators and consultants from all over the world.

When Should You Use MongoDB?

MongoDB is a general-purpose database used in many ways to aid applications across many sectors (e.g., communications gaming, finance healthcare, retail, and more). MongoDB is used in numerous industries and functions due to its ability to solve many of the issues that plague managing data and software. The most common uses for MongoDB are:

MongoDB is an all-purpose database that could offer many advantages for your development process. It can help you develop future-proof applications thanks to its ability to scale and flexibility of schema. It gives developers a superior experience by providing drivers for most major programming languages and the most extensive user base. It’s also accessible with any of the top cloud service providers.

Is it worth giving it a test today with MongoDB Atlas? When you’ve got access to your MongoDB cluster, you can take an online look at MongoDB University for a variety of complimentary classes to help you discover the advantages that come with using MongoDB.