MySQL Group Replication has been released since MySQL 5.7.17.
A quick start guide can be on the following URL
http://mysqlhighavailability.com/mysql-group-replication-a-quick-start-guide/

If there is a network partition between a group of Servers, it may introduce arbitration to find out and determine the next action for the Group of the Servers.
For documentation about Network Partitioning with Group Replication, please refer to the following URL::
https://dev.mysql.com/doc/refman/5.7/en/group-replication-network-partitioning.html

This blog is written to introduce my 'demo' version of arbitrator / watchdog.   From here onwards, I refer this arbitrator as gr_watchdog.
Another public arbitrator from Matt Lord can also be found on :
https://github.com/mattlord/myarbitratord
As an example, an application connecting to a group of servers with 5 MySQL instances on 2 machines.   Machine 1 (S1, S2, S3) and Machine 2 (S4, S5) 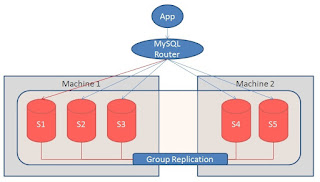 The following table is an example of the configuration for the Group Replication.

If there is any problem to the INTERVAL Network Interface between the 2 machines.   MySQL Instances (S1-S2-S3) is separated from (S4-S5).
It forms 2 group of Servers which they are disjointed.

The above diagram shows the Member State of Machine1:virtual-23 on the Left Side.  The Member State of Machine2:virtual-24 on the Right Side.
Machine1:virtual-23 has 3 ONLINE members in the Group.
Machine2:virtual-24 has 2 ONLINE members out of the 5 member size in the Group.   3 members are marked as UNREACHABLE.
Application if connected to this minority group (S4-S5) Servers may have uncertainty with data.  Updating data is prohibited by the nature of the Group Replication Architecture.

The gr_watchdog is shared as illustration to detect the member state in the group and take action (SHUTDOWN | READONLY | RESTARTGR) on the server(s). 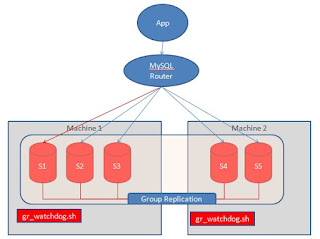 A script “gr_watchdog.sh” is created to monitor the local MySQL Servers on the machine. 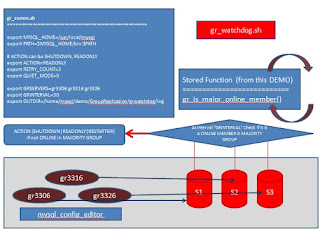 The gr_watchdog.sh monitor each of the MySQL Server Instances on the machine by using the
--login-path  which is created by mysql_config_editor.
For details about the “mysql_config_editor”, refer to the documentation :
https://dev.mysql.com/doc/refman/5.7/en/mysql-config-editor.html

A stored function “gr_is_major_online_member()” as show below :

If MySQL servers are in a Group Replication and they are all connected, executing the stored function creation on any of the server instance will be able to install the Stored Function to all server instances.

Stopping gr_watchdog.sh
# gr_watchdog.sh stop
OR
kill the process
To illustrate the gr_watchdog for the ACTION=READONLY; while ALL member servers are running, issue “stop group_replication;” on one of the server.   After retrying up to RETRY_COUNT=3, the server is set to READ ONLY – including READ_ONLY and SUPER_READ_ONLY.
To enable the GROUP REPLICATION, be sure to disable the READ_ONLY and SUPER_READ_ONLY if the “group_replication_single_primary_mode” is not set to TRUE. 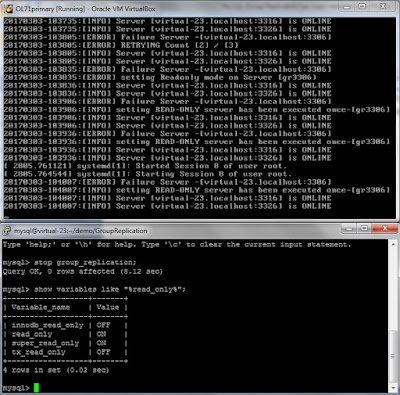 Again, the is just a demonstration how we can create external arbitrator / watchdog for MySQL Group Replication Servers.