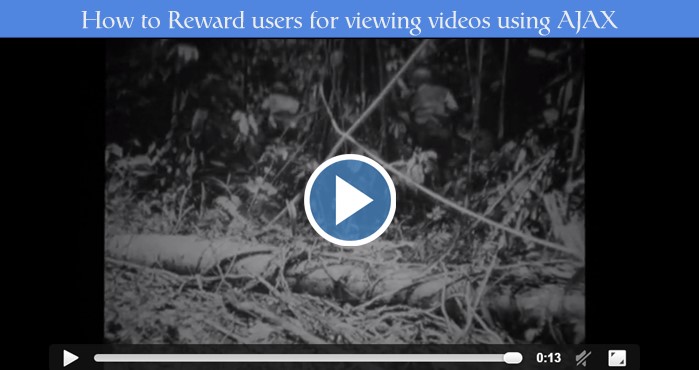 How to Reward users for viewing videos using AJAX

We would not be using any framework or library, just vanilla JavaScript

Firstly, we simulate a JSON response from our server

#messages is the element where we would write that the user has earned points or that he already watched that video so no points would be given to him.

#video-wrapper is the element where we will load our video paths through AJAX.
<!DOCTYPE html>

<body>
<div id='messages'>
<h1>Watch videos and earn points.</h1>
</div>
<div id="video-wrapper">
<script>
var points = parseInt(localStorage.points, 10) || 0;
var watched = localStorage.watched || [];
if (typeof watched !== "object") {
watched = JSON.parse(watched);
}
We set up the points to be equal to the current points stored in localStorage or set them up to 0 if localStorage.points is undefined.

We fetch api.json and execute the reqListener function whenever the request is complete.

Then, we parse the responseText as json and loop through each video adding it to the DOM.

We add an ‘ended’ event listener for each video and check if this.played.length is equal to 1. It would be 1 only when the user has watched the entire video.

If he has watched the entire video, we check if that video source is already in the array, and if it is we give him a message that he has already watched it. If it is not in the array, we add it to the array, give him points and a congratulatory message.

That is all there is to it. Now, you can take advantage of this and implement it in serious projects.
function reqListener () {
var videoSrc,video, response = JSON.parse(this.responseText);
for (var i = 0, x = response.videos.length; i < x; i++) {
videoSrc =  response.videos[i];

}
I hope it helps you please do share it. If you face any problem write in comments.